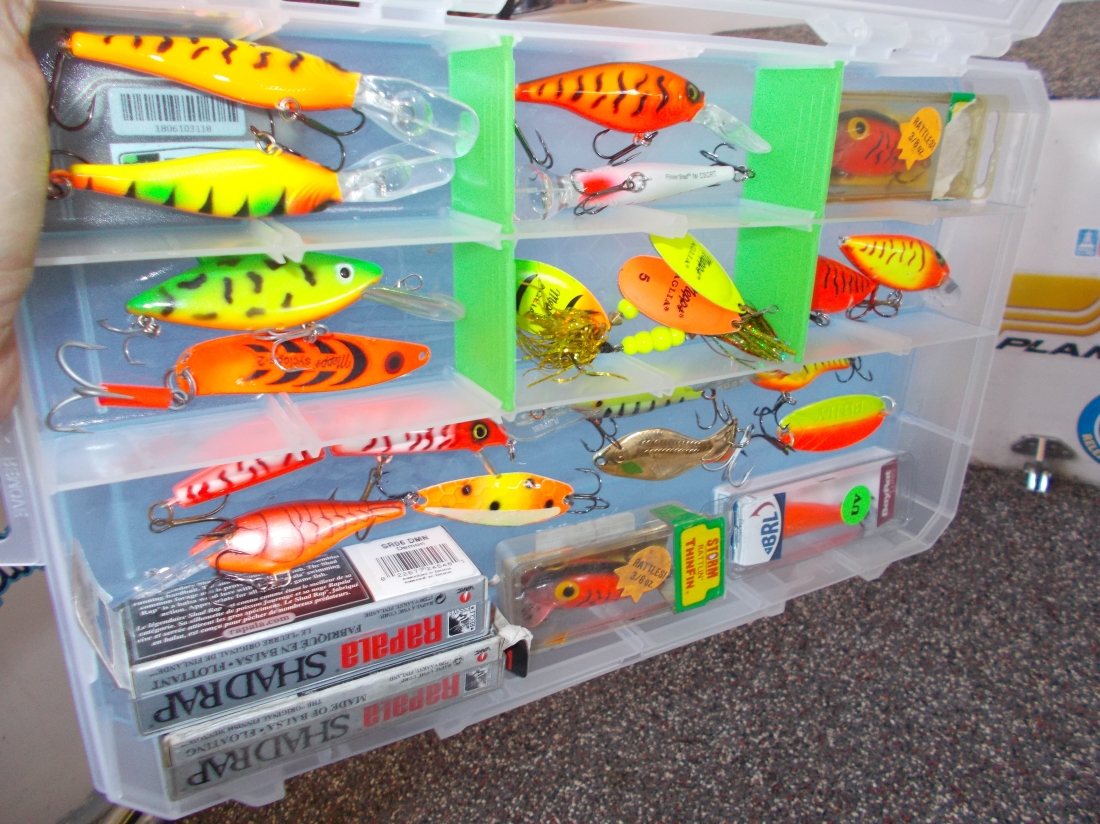 When you get on my boat, you are going to see most of my lures tucked in Plano, Stowaway boxes. They are the perfect answer for me since I have limited on-board storage areas on my boat. I take the ones I’m likely to need and shelve the one’s I won’t need back home.

When I was at ICAST I noticed a company called Lure Lock had jumped into the tackle organizer business with versions of their own. At first look they appeared to be pretty much clones of Plano Stowaways and other brands.

Perhaps the latches were a bit different but were they better? The dividers you snap apart and insert to divide the inner compartments were green plastic instead of translucent – yippee! They do snap apart cleanly, but I never thought that to be an issue. Lure Lock does have some sturdy racks (they call lockers) to contain and store the boxes, but again, nothing I don’t already own.

I handed my business card to one of the reps at the booth and moved on. Surprisingly, a week or two later they shipped me a couple of their size-large boxes – sized the same as Plano 3700 Stowaways. A few days later I grabbed one of the Lure Lock boxes when I was reorganizing my on-board lures when transitioning from targeting offshore salmon and trout to nearshore, staging kings. This is when I noticed the GIANT difference between the Lure Lock box and all the others.

I dropped a J-13 Rapala into one of the slots then grabbed another lure. Then I reached in to slide the J-13 over to make room for the next and it didn’t move! What?

The bottom of the box is covered with a thin layer of   “Taklogic Technology” tacky-stuff – sort of what you’d expect if you poured a 1/16th inch of maple syrup in the bottom and let it sit out for a couple days. It’s sticky!

It’s not maple syrup. The TT-stuff is sticky, but not stick-to-the-lure sticky. I tried turning the box upside down and the J-13 did release from it’s own weight. I put it back in and pressed it in place and tried again. It stuck – even upside down. That’s not the TT’s purpose, however – to hold lures upside down.

The purpose is to keep lures from sliding around, bouncing around and tangling with neighboring lures under normal use – normal being a bouncing boat, being pulled in and out of a compartment or storage locker and loaded into an out of the boat as needed. I’m confident more of my lures turn from being bright, shiny, perfect looking lures to scuffed, scarred, dull and scratch-finished lures from riding in tackle boxes than get that way by being chewed up by fish. They get that way by being in a bouncing boat, being pulled out of a storage locker or loaded into or out of the boat.

Put it this way. Ever hear the lures in one of your tackle boxes rattling when you are moving it? They are being damaged and you know it.

No, the TT stuff isn’t sticky enough to peel the paint off of lures. No, the TT stuff doesn’t make the lures sticky. No, it doesn’t react to paint or plastic worms. If the TT stuff gets dirty or grimy, the Lure Lock people suggest washing it with soapy water or sticking it in a dishwasher. (Mine isn’t that dirty, yet.)

Nice, you think, but if you are like me and own a mountain of Stowaway boxes crammed with lures, you aren’t ready to junk them all to buy the Lure Lock versions. Just out, you can purchase retrofitting strips of the Taklogic stuff to stick in your existing boxes. These are called Retro Kits – duh! The kits, Lure Boxes and Lure Locker storage totes are available at retailers or online at http://www.lurelock.com.